Planning is key to a smooth and high-quality production, whether it’s a feature film or a PowerPoint presentation. Many people are accustomed to the idea of generating a script during the planning phase, but a script is often not enough. For a video project, storyboards are used to sell your idea, discover problems with the story before you start filming, and make sure everyone from the actors to the camera operator is on the same page about what needs to be done to complete the project. Before you pick up a camera, spend the time to think about what shots and angles you want (wide establishing shot, close-up details shots, b-roll/cutaways, etc), the purpose behind each shot, the props you’ll need, and the story you’ll tell with action on screen. Click to view a compilation of ideas and techniques for Cinematic Storytelling. Think about your locations and lighting, your crew and cast, and how you’re going to get from beginning to middle to end within your time and other budget constraints. A storyboard helps keep the project on track.

You can create a storyboard in whatever format makes most sense to you. Many people like to sketch out each shot on paper and then scan it. Here are two templates for you to consider using: a 16×9, 3-Up template and a 16×9, 9-Up template. Other people like to take mockup photos with their digital camera, and then use PowerPoint to arrange them. It’s up to you to choose the method; what’s ultimately important is that you do this planning before you pick up a camcorder to start shooting. Your storyboard doesn’t have to be really complicated nor artistic (stick figures are fine), but it needs to have a clear beginning, middle, and end. 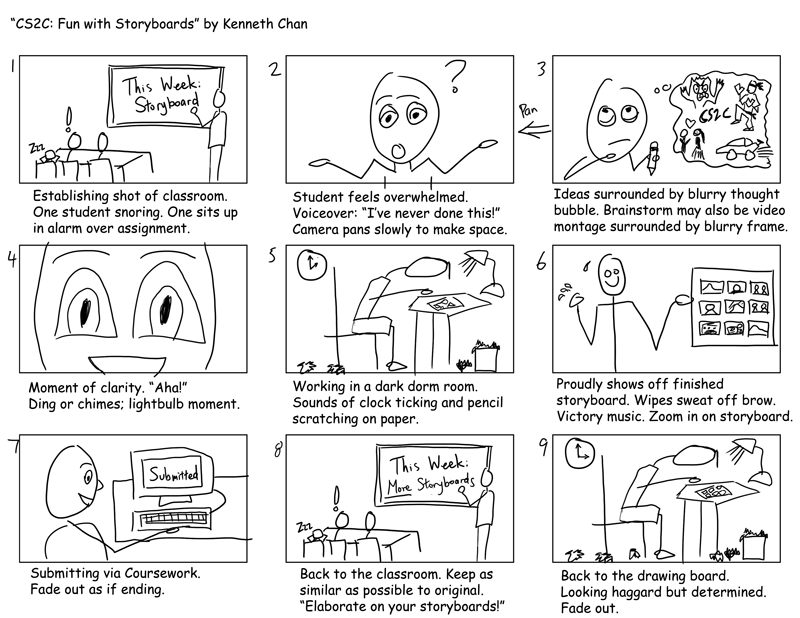 In early drafts of a storyboard, there are often gaps in the story that can be further expanded. For example, there’s a whole story to be told between frames 8 & 9 in the storyboard above. How does the main character react to the news from the instructor in frame 8? What does he do about it? How does he eventually end up at frame 9? Check out one possible storyboard expansion that is meant to be give more thought and detail into what’s happening between Frames 8 & 9 of the original.

That’s the basic introduction to the process. If you’re feeling stuck, here are some additional resources detailing how to think about storyboards: